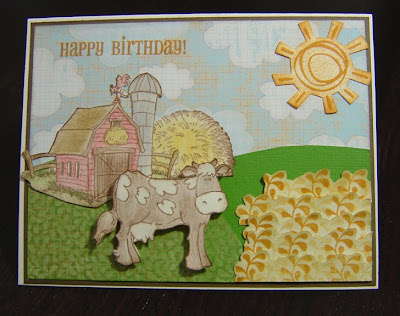 As you may have read in some of my earliest posts, my brother is a farmer. So, I always try to come up with some kind of farm-themed card for his birthday. His birthday was back in June and I'm just now getting around to posting this. Boy, the summer sure has gotten away from me! Anyway, here's the card I made for him. The yellow stuff is supposed to be wheat, which is one of the crops that he grows. I used the small swirly branch image from the Over the Rainbow stamp set in first and second generation stamping to make "rows" of wheat and then cut them out. I just slightly overlapped them when putting them on the card.
All supplies from CTMH
Stamps: Hay There, Over the Rainbow, Say It In Style
Paper: Splendor B&T clouds, Splendor B&T green print, Clover Meadow textured cardstock, Cocoa cardstock, Colonial White cardstock
Inks: Cocoa, Goldrush
Posted by Janelle Janish at 9:59 PM

Email ThisBlogThis!Share to TwitterShare to FacebookShare to Pinterest
Labels: Hay There, Over the Rainbow, Say It In Style

Such an adorable card! Thanks for joining us at H2H!

Fabulous farm scene! Love all the details:) Glad you could join us at H2H!

This is so cute!

Great use of B&T's to create the grass & wheat! Thanks for sharing with us at H2H this week :o)

What a perfect card for a farmer! Love it. The scene is darling. TFS.

Just darling! Thanks so much for sharing your super cute card with us at H2H1 *Ü*

Absolutely love it! That (Farm) stamp set has been on my wish list for a while -- you've got me tempted even more. I love what you did with it. It looks great!!!

This is awesome! fabulous job. Thanks for playing at Heart 2 Heart :)

Hi Janelle,
Simply adorable! You did a great job on this card and I am so happy you could join us at H2H!

Paper Crafting is my Happy Place! I'd like to help you find your happy place, too! It could be scrapbooking, traditional or digital, stamping and creating hand-made greeting cards, or creating beautiful gifts or decor items. For me, it's all of the above, but most importantly, it's the treasured friendships I've made while at a party, workshop, crop, weekend scrapbook retreat, or the Close To My Heart annual convention. Those friendships are the best part of my Happy Place!
Let me help you find your
CRAFTY HAPPINESS! 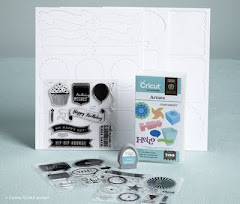